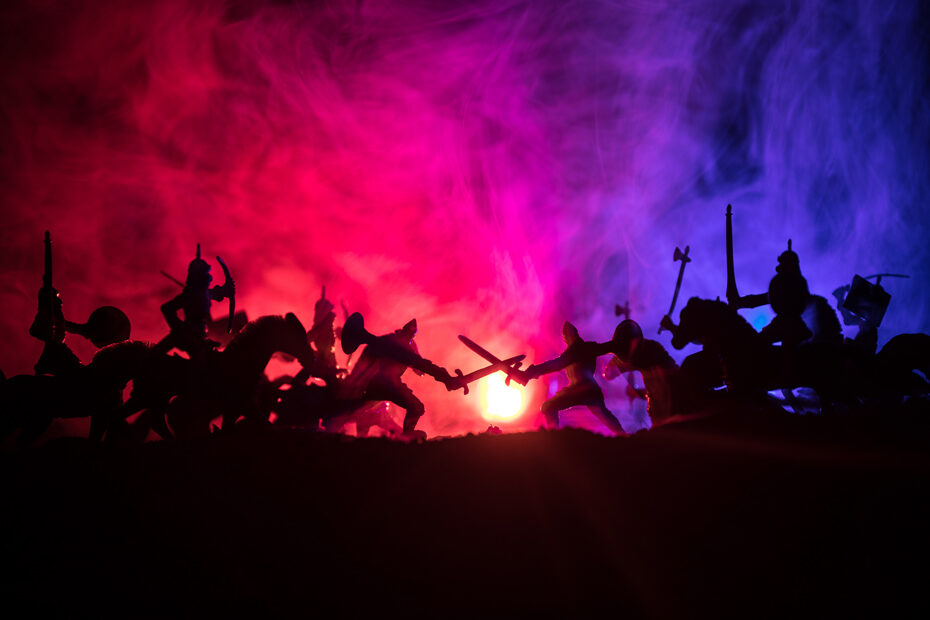 Both players and dungeon masters look forward to combat encounters in Dungeons & Dragons. They’re a chance to show off character abilities and cool monsters. But how do you ensure that your combat encounters won’t disappoint? The last thing you want is for the experience to be bland, expected, or too mechanical. Creating dynamic and challenging combat scenarios is a tall order. That’s why I’ve compiled a list of my top tips and tricks for crafting memorable combat!

Be As Descriptive As Possible

Become a master of description when narrating combat. Why say, “The monster makes a claw attack… it fails” when you could instead say, “The creature slashes at you with bloody claws and you narrowly avoid its vicious attack”? Language matters when you’re telling a story. It can set the tone of the scene that’s playing out, it gives a much deeper description of what is happening, and it creates a more engaging combat experience for both players and the dungeon master.

If you were in a fight in real life, there would be a reason it was happening. The same is true in your game! Think about the motivations behind why a monster is attacking the players. Did they lure the party into a trap to rob them? Are they acting in self defense and see the party as intruders? Is the monster just looking for a quick meal? Maybe they’ve got a personal vendetta against a character. If you know why a monster is attacking, then you can accurately portray believable behavior.

Monsters are thinking creatures with objectives (for the most part). Because of this, it’s unlikely that they wouldn’t learn from mistakes in combat. If they attempt something that fails, they should change how they approach the problem. Failing to land a hit? Choose a perceived weaker target. Is a target unexpectedly dangerous? Attempt to eliminate them first. Chances of success looking grim? Flee from combat! There’s nothing realistic about a monster that repeats the same unsuccessful action over and over.

Combat is more interesting for players if they have to guess what they’re fighting. This is especially true for veteran players or former DMs that have monster abilities memorized. You can even “reskin” monsters by using their original stats but changing or flavoring their appearance. Additionally, don’t explain the mechanics of your monster’s moves if you’re able to conceal them. Letting players know exactly how your monsters function gives them an advantage that their characters wouldn’t have naturally.

Why not do a little research if you’ve planned to include an encounter with a particular monster or enemy? Search online for stories from other DMs who have successfully used the monster you’re considering. There are tons of stories and advice on how best to utilize the monster’s abilities or incorporate them into a story. Ask questions on Twitter and see what the TTRPG community has done with the monster in their own games. It doesn’t hurt to seek advice from those who have experience.

If you aren’t using the terrain in your combat encounters, you’re missing out on a great opportunity. You can utilize the battlefield way beyond just determining “difficult terrain”. Have your monsters hide behind boulders, pillars, trees, or walls. Incorporate traps that trigger in combat. Use weather to make things complicated for players with mudslides, hail storms, or heavy pollution. Make your battlefields come to life with hazards or useful features that encourage innovative player moves.

Manipulate The Field Of Play

Expanding upon the last point, you can utilize the terrain even further. Monsters and players alike can change the tide of the battle by manipulating the battlefield. A misplaced fireball can light an entire forest ablaze. Sewer combat can be derailed if someone turns the wrong valve. Too much structural damage during combat on the deck of an airship could cause the craft to crash. The best thing about this tactic is that changing the field of play can be an intentional action… or a total accident!

Keep Some Enemies In Reserve

A fun trick to bust out is to introduce new enemies after a few rounds of combat. Players get used to the initiative order and more methodical players divvy up their combat resources for what they see on the field. Then, you drop in some monster reinforcements. Or flip the script entirely and reveal that what they were fighting before was the prey, not the hunter. Remember, you want to use this trick sparingly. That way it will always be surprising to your players.

It’s easy to forget that D&D is a roleplaying game while you’re embroiled in mechanical combat. But what makes it different from a video game is the fact that you can explain, customize, and make combat actions your own. So why not encourage your players to do so? When they attack, ask what it looked like. Where were they aiming that sword slash? What color was their Eldritch Blast? And of course, how do they slay the monster? It’s a guaranteed way to encourage dynamic combat at your table.

I hope these tips help to make your combat extra exciting! Until next time, stay creepy and happy gaming.