How To Use Tarot Cards As A TTRPG Character Writing Tool 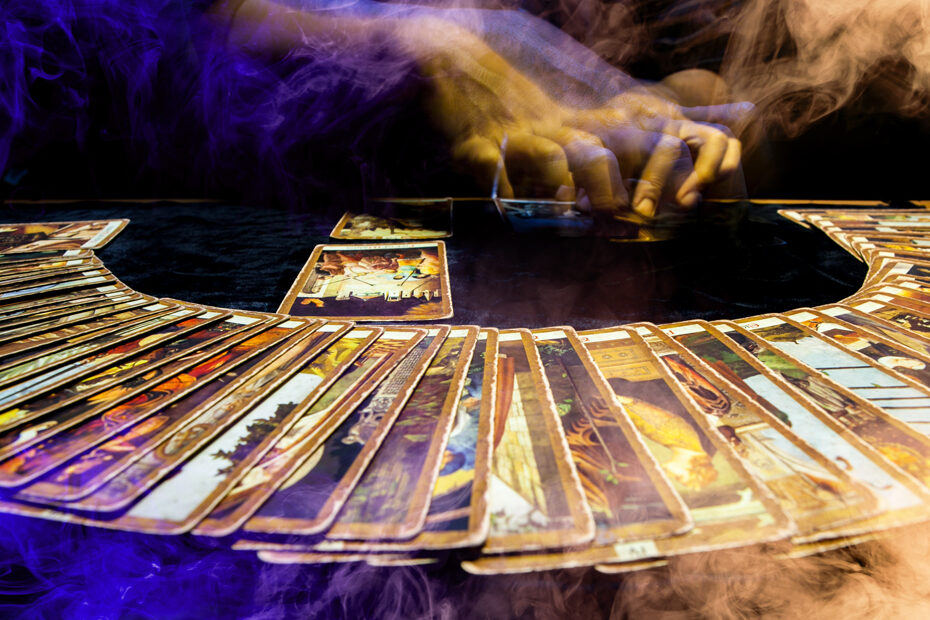 I’ve always been super fascinated by tarot cards. They are mysterious, beautiful, and sometimes even feared. But did you know they can be used for more than just telling the future? Here’s my step-by-step process for simple character development using nothing more than a deck of tarot cards.

Why Use Tarot Cards?

Tarot cards are separated into two decks. The major arcana is what most people are familiar with. These 22 cards represent the major steps of the journey that any given person will go through in life. The minor arcana deals more with smaller day-to-day concerns. Because of this, tarot cards make for an excellent writing tool. This is especially true when creating characters. It’s a bias and outlook free resource to get you thinking outside your own experience. Plus it’s spooky, which is just plain fun!

What This Method Is Good For

I use this fate-inspired spread when creating new characters or NPCs. It’s really great getting out of your own head and coming at a character from a different perspective than your own. It’s also a good tool for when you’re too burned out or lazy to write a town full of NPCs. Let the cards do the heavy lifting for you! You’ll still be the one interpreting and deciding what aspects of the cards will translate to the character. Think of this method as an aid to your creative writing skills.

While I love the tarot decks and materials I’ve purchased, I’m also all about doing things for free. If you don’t own your own cards or books, don’t feel like you need to run out and buy them. There are a ton of free resources online! Simply Google “Tarot Card Generator” and “Tarot Card Meanings”. You’ll find everything you need to start creating! Just make sure that the generator you select includes the Major Arcana AND Minor Arcana. This will give you a lot more room for variety in your results.

You’ll be drawing 5 cards from the tarot deck. The cards, in the order that you drew them, represent the character’s past, present, goals, flaws, and a secret about them. Don’t worry about whether they are facing up or down. That is irrelevant for the purposes of this spread. When you interpret the cards, read the upright and reversed descriptions to determine which best suits the character you are trying to flesh out. This method is less about divination and more about giving you a tool for writing.

The first card represents a character’s past. This could be where they came from, their history, backstory, their childhood or adolescence, etc. For example, if you draw the Five Of Swords, this could mean that the character has experienced a serious falling out with someone important to them. Or you could interpret it as a tense conflict in their formative years that shaped them. Another interpretation could be that the character still holds a lot of resentment about a past argument.

The second card represents a character’s present. This is where they are in life right now. It could be their present situation, an outlook on life, their mental or emotional state, or the type of people they currently surround themselves with. For example, say you draw the Ten Of Cups. You could read that as they’ve found a safe place and created a loving family for themselves. Maybe they’ve just entered into a happy marriage. Alternatively, it could mean that they are having trouble finding a good relationship.

The third card represents a character’s goals. What are they working towards? What would make them truly happy? What are they obsessed with? For example, if you draw the Knight Of Wands, this could mean that your character wants a life of danger and adventure. They could aspire to be the brightest person in the room, someone to look up to. It could even mean that they want to be more impulsive, make their own mistakes, or want to work more on their short term goals.

The forth card represents a character’s flaws. What does your character dislike about themselves? What areas of their life need improvement? What personality imperfection makes them unique? What’s holding them back from accomplishing their goal? For example, let’s say you draw The Hanged Man. This could signify that your character always feels stuck in life. It could mean that they have a serious problem with self care and don’t take time to rest and recharge. Or, it could be that your character self sabotages through indecision.

The fifth card represents a character’s secrets. What personal secret are they hiding from the outside world? What are they hiding from themselves? For example, say you draw The High Priestess. Maybe this means that the character holds a deep spirituality that they keep to themselves. They could be very intuitive and gather more information from interactions that they let on. It could also signify hidden agendas. Maybe this character is more than they appear…

Deviation From Your Reading

If you don’t like the card you’ve drawn for a character, by all means, draw a different one! If a card is not quite right, use it as a jumping off point for your own original ideas. Shuffle the five cards you’ve drawn around until they make sense for the character you’re building. There are no rules when it comes to using tarot cards in character building. After all, I’m sure the cards will forgive you for not trusting in their judgement and won’t hold it against you at all… Haha, just kidding!

Please enjoy this writing tool and let me know if you get any interesting readings! Until next time, stay creepy and happy gaming.