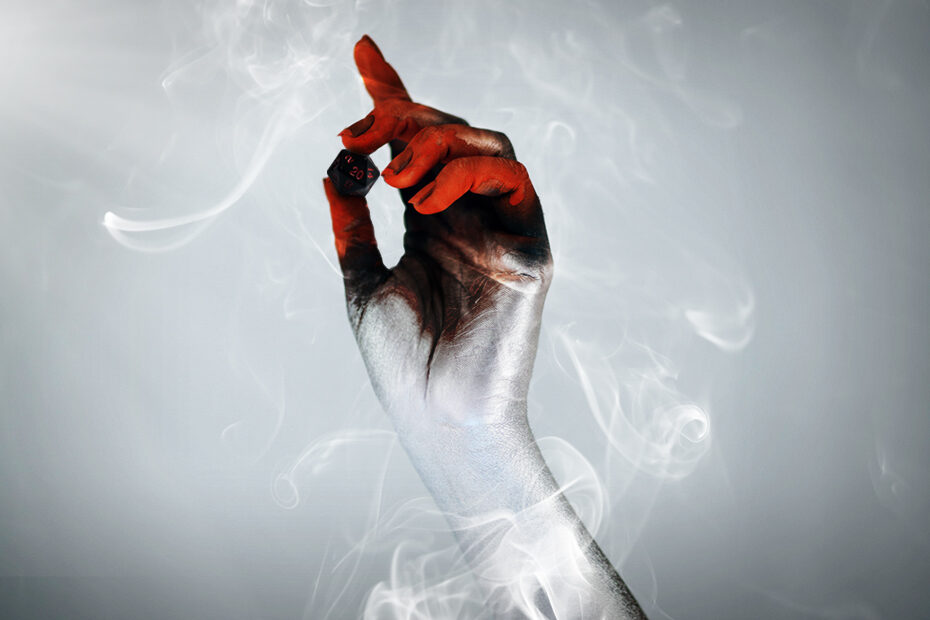 If you’re a fan of the Ghostlore Blog, you know that I love “This-As-That” style lists. You can check out some of these lists in my previous articles If D&D Classes Were High School Cliques… and The Top Twelve D&D Snacks By Class. For whatever reason, I rarely see this style of article focus on creature types. There are so many that I thought it’d be fun to explore what each one would be like as a dungeon master! Ready to dive in?

An aberration dungeon master has a sharp mind and a wild imagination. Like their alienesque counterparts, they take their players on an unexpected and out-of-this-world journey. They are also excellent multitaskers with a tentacle in every pie. The aberration DM has the hunger for knowledge of a mind flayer, the cockiness of a beholder, and the versatility of an aboleth.

Features of an Aberration DM include:

Beasts in Dungeons & Dragons are animals of the natural world. Likewise, a beast dungeon master likes to run their campaign as “naturally” as possible. They love a high-realism game that makes everyone at the table feel like they’ve really been thrown into the action! The Beast DM has the grandeur of a mammoth, the sharpness of a giant eagle, and the camaraderie of a wolf pack.

Features of a Beast DM include:

Kind and accepting, these are the defining traits of a celestial DM. They are easily the most lenient of all dungeon masters, allowing all kinds of rule-bending shenanigans at their table. A celestial dungeon master is all about inclusivity and loves to share their favorite game with others. The Celestial DM is as supportive as a planetar, communicative as a deva, and as rare as a unicorn.

Features of a Celestial DM include:

Reliable and dedicated, you can always depend on a construct dungeon master to take their position seriously. In the same way a construct has been brought to life by an outside force, this DM is animated by their passion for the game. The Construct DM has the precision of a flying sword, is a little overwhelming like a rug of smothering, and is as steadfast as an iron golem.

Features of a Construct DM include:

A dragon dungeon master is a powerhouse behind the DM screen. They aren’t afraid to pull out all the stops for a high-risk, high-reward adventure. Like their ageless counterparts, this DM never shies away from investing their time in a campaign that spans many years. The Dragon DM is powerful like a red dragon, venomous like a wyvern, and fair like a silver dragon.

Features of a Dragon DM include:

Elementals hail from the full range of planes of existence in Dungeons & Dragons. An elemental DM is similar in that they love to lead their players through a story of interplanar travel. Their narrative style is as changeable as the elements, shifting between fiery combat, breezy travel, and fluid interaction. The Elemental DM is as mysterious as an invisible stalker, as snarky as a smoke mephit, and all about wish fulfillment like a genie.

Features of an Elemental DM include:

Fey are known as tricksters, but also fierce protectors of what they treasure. This is mirrored in the fey dungeon master. This DM won’t tolerate rudeness or slights at their table. They are likely to beguile players with an intriguing world and ensnare them with a complicated story. The Fey DM is as manipulative as a green hag, as quick as a blink dog, and as charming as a dryad.

Features of a Fey DM include:

Nobody plays the BBEG quite as well as a fiend dungeon master. They are experts at crafting perfect villains and evil plots for the party to foil. This DM’s greatest strength is an excellent understanding of people and motivations. The Fiend DM is as enthralling as a succubus, as mighty as a balor, and as charismatic as a horned devil.

Features of a Fiend DM include:

A giant dungeon master, as their name suggests, likes to go big or go home. There is no room for nuance or subtlety at this table! They often skip over what they had planned for a session by mistake in their haste to reach plot points they find more interesting. The Giant DM has the impatience of an ogre, the endurance of a frost giant, and the resilience of a troll.

Features of a Giant DM include:

Just like their creature counterparts, humanoid dungeon master enjoys the social aspect of tabletop gaming more than anything else. They are just as happy playing a one shot as they are a long campaign. This DM loves murder mysteries, urban settings, and combat encounters you can avoid though conversation! The Humanoid DM is cunning like a drow, as crafty as a goblin, and delights in mayhem like a bugbear.

Features of a Humanoid DM include:

Monstrosity dungeon masters pull inspiration from myths when planning out their sessions. After all, classic monsters are classics for a reason! They love remixing common tropes and tired stories to create something new, fresh and exciting. The Monstrosity DM is as unpredictable as a gynosphinx, as feral as an owlbear, and as legendary as medusa.

Features of a Monstrosity DM include:

An ooze dungeon master is hard to pin down. They love chaos, but don’t bend the rules of the game. Instead, they find a legal way around the rules that the table never expects. This DM is great at pushing player characters to their limits and forcing them to come up with creative solutions. The Ooze DM is as efficient as a gelatinous cube, as merciless as a black pudding, and as slippery as an ochre jelly.

Features of an Ooze DM include:

At first glance, a plant dungeon master might seem like they are simply taking on the role because no one else wanted to run the game. However, this DM should never be underestimated. Masters of the long game, they’ll lull you into a false sense of security…  and then strike! The Plant DM flies under the radar like a shambling mound, makes sudden decisions like a shrieker, and holds many secrets like a treant.

Features of a Plant DM include:

Much to no one’s surprise, this dungeon master has a penchant for horror themes and spooky vibes. The tropes of horror movies always creep into their games, regardless of theme or setting. An undead DM loves to throw wave after wave of low level monsters at a party. The Undead DM is as brilliant as a vampire, persistent as a zombie, and has an arsenal of tricks up their sleeve like a lich.

Features of an Undead DM include:

Which creature inspired dungeon master do you relate to the most? Until next time, stay creepy and happy gaming.