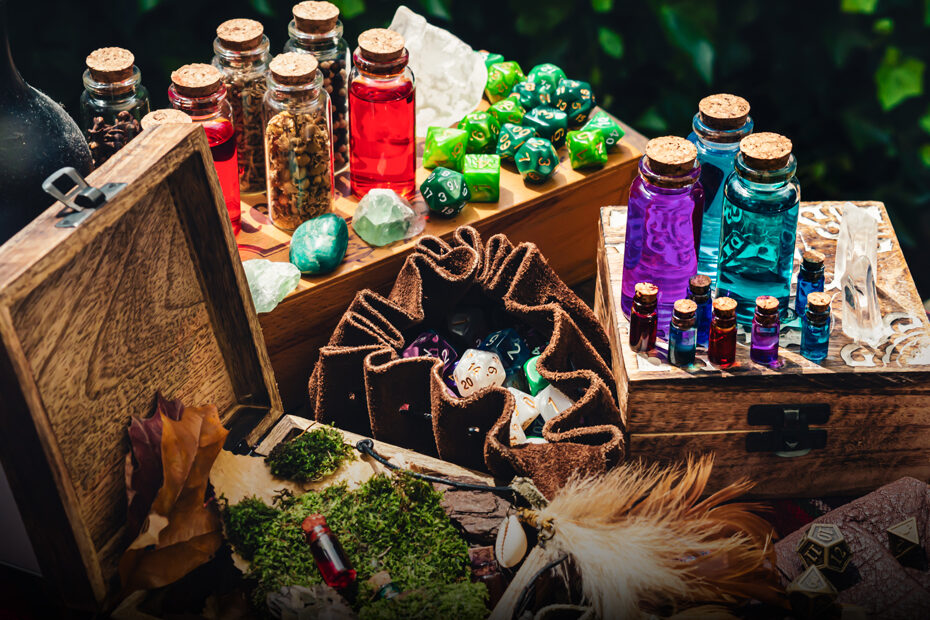 It’s finally October, which means things are about to get spookier than usual on the Ghostlore Blog! I thought we’d kick off my favorite time of year with the topic of dice rituals and superstitions! Some like to say that rolling dice is about “probability” or “logic”. But these tried and true dice superstitions and spells say otherwise…

An old TTRPG enthusiast’s superstition is to make sure that a dice not being used has its highest value facing up. For example, a d20 should have its 20 facing up, a d8 should rest with 8 on top, etc. The idea is that the dice will grow accustomed to resting that way and rolls will result in the highest value more often. Or, like a horseshoe, the luck will pour out of the highest value side if not kept upright. Besides, it just doesn’t feel right to have lower values prominently displayed.

When a dice performs well it should be rewarded. Perhaps you set it in a place of honor, such as a dice throne, an exclusive silk bag, or a focal display case. Give it a name and only bust it out for really important rolls or special occasions. This “roll in case of emergency” approach could influence a critical story point in your game. Appeasing the gods of fortune by honoring their chosen vessel buys you a little more luck. After all, everyone likes to be congratulated on a job well done. Why wouldn’t the same be true of your dice?

Conversely, a dice that fails you needs to be punished. This is especially true of repeat offenders. Toss them in a dice jail and throw away the key. Seal them in a bag at the bottom of your tabletop supplies. Make it clear that they have landed themselves in a place of dishonor. Just make sure that they are far away from your well performing dice. You wouldn’t want a bad influence poisoning your entire collection against you. When the time is right, release the dice on a probationary basis.

This simple test is for determining imperfections in light plastic dice that may be causing them to roll poorly. Fill a cup with warm water, dissolve a generous amount of salt in the cup, and float the dice in question. Roll it around on the surface to see what numbers get “rolled”. A dice without plastic bubbles or imperfections should have different roll results every time. If you notice it favoring certain roll results, it may be faulty and you might have to consider decommissioning the dice.

Keep Your Hands To Yourself

In various magical traditions, you infuse your energy into an object when you touch it. Through accidental intention, you can influence the luck or fate of anything you physically handle. This is why some tarot readers cleanse their cards if someone else touches them. By this logic, letting other people roll or even touch your dice messes with fate and can muddy up your chance at rolling well. Alternatively, you can ask a lucky friend to roll your dice for a bit to capitalize on their luck. Always ask someone before grabbing their dice to use.

Breathe Some Life Into Your Dice

Blowing on your dice for luck is a common superstition both in TTRPGs and at the casino. The origins of this one go way back. It’s thought that blowing on the dice was originally done to clean them off so the roll wouldn’t be affected by debris. Another theory is that cheaters used to coat their dice with a breath or moisture activated glue-like substance for a more predictable roll. Nowadays, the tradition has become associated with luck and is a widespread practice.

There are a lot of options when it comes to cleansing cursed dice. I’ve heard of smudging them with sage, purifying them in salt, charging them in a sacred circle, storing them with amplifying crystals, massaging them with lavender oil, bathing them in the light of a new moon… you name it! Most of these are based on traditional magical blessings. Before attempting this, do your research! You wouldn’t want to accidentally open a door you can’t close…

Sometimes, a dice is just not salvageable. If you’ve tried every ritual in the book, every superstitious trick you know and it still betrays you… it may just have to be destroyed. It’s best if the other dice in your collection see the offender’s demise. Having them bear witness will serve as an example of what happens to a dice that is cursed. You could smash it with a hammer, toss it into a body of moving water, melt it with a blow torch, etc. How you destroy the dice is irrelevant, so long as its sacrifice serves this purpose.

Disclaimer: I can’t guarantee that these dice rituals and superstitions actually work… Or that you won’t accidentally summon a demon or whatever!

What are some of your own dice rituals and superstitions? Until next time, stay creepy and happy gaming.