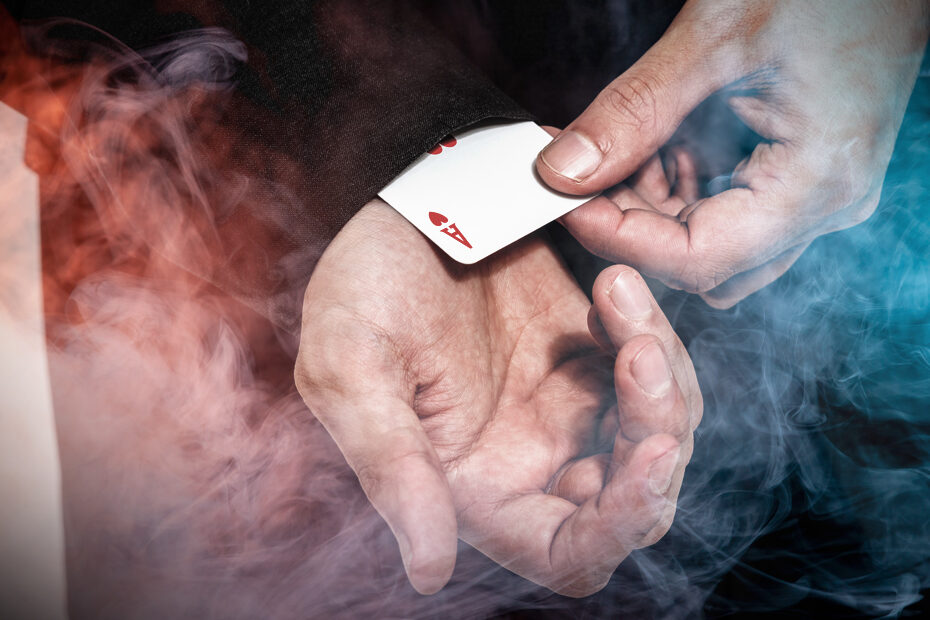 Sometimes things can get a bit stale at the table. As the game master, you should have an array of tricks to pull out when players become too complacent. Listed below are some of my favorite tricks to throw at players during a game. Be warned, some of these are extreme and will elicit a big response in your group! These Game Master tricks are sure to keep them on their toes…

Bring Back An Obscure Plot Point From An Earlier Session

If you keep detailed notes as a GM, this is an easy one to pull off. Wait to bring back the plot point just long enough so that players have forgotten about it. Was the party rude to an NPC in the first session? That NPC was actually a high ranking official and now refuses them access to information they need. Did they choose not to investigate a bandit attack? Those bandits have now organized and are terrorizing the highway. Keeping an eye on your world’s background activities can create interesting opportunities for your players.

Develop A Pattern For The Sole Purpose Of Breaking It

For a couple sessions, repeat the same format or types of tasks. Maybe players have to complete a series of minor objectives or fight a particular type of enemy. Once the repetition makes them think they know how to accomplish their goal easily, switch up the conditions! The tactics that worked against monsters before are now ineffective. The simple task they’ve repeated several times now hits an unexpected snag. Keeping players guessing makes the set up of this trick well worth it.

Delve Into A Player Character’s Background Without Warning

When in a player character’s home town, it’s expected that their backstory will come into play. However, if the character is far away from their home, it is very unexpected that they should run into someone from their past! Maybe a relative is traveling and runs into them by happenstance, a bounty hunter is tracking them for crimes they are trying to escape, or a scorned lover is looking for revenge. There are a lot of possibilities for surprises!

Some parties have enemies that are, “The One That Got Away”. Maybe they ran off while the group was distracted. Perhaps their lives were spared and players turned them in to the local authorities. Whatever the reason, they survived. This makes them a resource for you, the GM. Have an old enemy pop up randomly in a session or build an epic campaign around them. Are they rehabilitated? Back to their old villainous tricks? Go for something unexpected, especially if the party has a strong emotional reaction to them!

Create Overwhelming Tension Only To Have Things Turn Out Fine

This one’s always fun. Set up a tense situation in the session. Let it build until the tension is unbearable. Then, just when players think something horrible may happen, reveal that they are safe! For example, players find themselves in an argument with a tough looking gang at a pub. Just when things are about to turn violent, the gang’s leader reveals that this is all just a joke. He explains that this is how they initiate newcomers and buys a round for everyone. It’s a fun trick without harm or any consequences.

Present A Seemingly Harmless Situation That Is Actually Deadly

Alternatively, you can create a situation that seems calm and completely safe. Then, without warning, spring a deadly trap on your players. As an example, players seek a particular book in their local library. They enter into a mundane building, consult the librarian, and find what they’re looking for. When they open the book, it creates a tear in reality that sucks them into a parallel dimension with no easy way back! If you use this trick sparingly, they’ll never see it coming.

Reveal That NPCs See Them As Villains, Not Heroes

In your player’s perspective, they usually see themselves as admirable heroes. However, the NPCs of your world may not agree. Create a group of NPCs that are negatively affected by the party’s actions. Make sure that they are really lovable or especially pitiable. This is a sinister endgame tactic that can influence how the party proceeds with finishing the campaign. The goal here is to really make the players question what side they’ve been fighting for all along.

Make Them Deal With The Consequences Of Their Actions

My personal favorite and signature move as a GM. Keep track of what players are doing from session to session. Think about the consequences of those actions, and then unleash them on the party. Have a wife approach the group and confront the player who killed her husband. Pull at their heartstrings by revealing the adorable babies of a monster they’ve just slain. Present them with the destroyed remains of a village they failed to protect. This works especially well if your players like getting into trouble.

I’d love to hear stories of your own game master tricks. Comment below and share a time you really caught your players off guard! Until next time, stay creepy and happy gaming.