How To Include A Newspaper In Your D&D Campaign 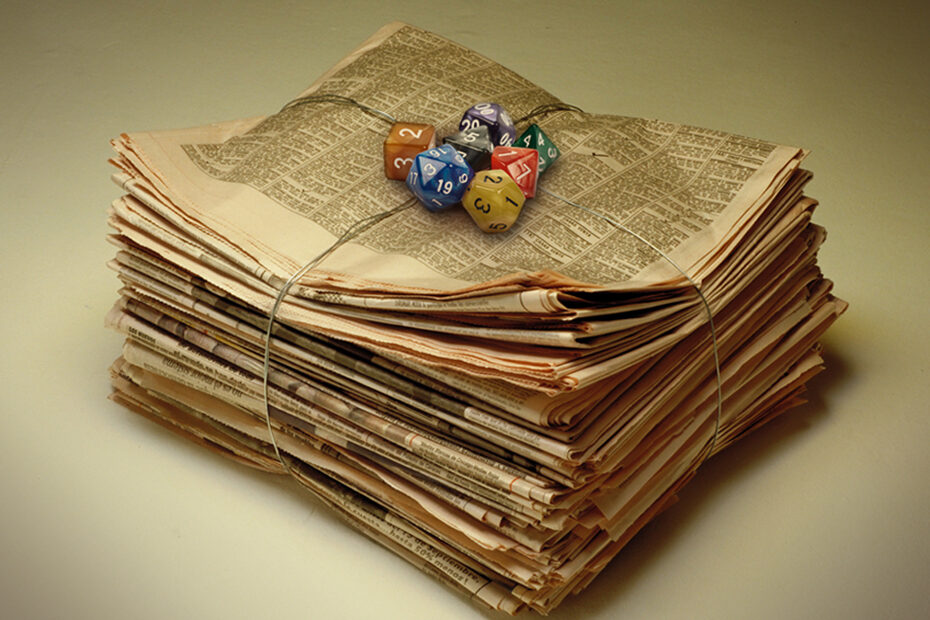 Being aware of current news stories is important whether you live in a medieval fantasy world or the modern age. So, why not give the characters at your D&D table a way to access the newsworthy events in their own world? Including a newspaper in your game is a great way to keep the story moving, deepen your world building, and involve players in the world beyond what their characters might be up to. But putting all that aside, it’s just a fun way to deliver information beyond telling it through your NPCs. Have I sold you on including a fictitious publication in your game? If so, here’s my tips on getting started…

Why Include A Newspaper?

Sometimes characters need to know what’s going on in their world on a larger scale than what they’re overhearing in taverns or on the street. With a paper, they can look at their surroundings beyond their own experience. What’s the state of the kingdom? How’s the war effort going? Any local injustice that needs to be set right? What’s the political climate of the city? All these questions can be answered without having to create multiple NPCs to awkwardly deliver the information to keep the story moving.

Consistent local news articles present your players with opportunities to intervene. It’s a perfect alternative to having an NPC approach the party with a quest to offer. You can go the more direct route with an odd-jobs column, help wanted ads, or a bounty hunter’s page. Or you could be more indirect and have articles imply that there is a quest available for those savvy enough to read between the lines. Either way, newspapers make side quests and even major plot points easier to present to your players.

A newspaper is great for showing the cause and effect of the player’s actions or in-game decisions. Articles can mention the party and their deeds directly. This can increase their fame and chances of being contracted for more high-profile work. But it can also draw unwanted attention, creating fun story opportunities. Alternatively, you can show the lasting, indirect results of a party’s actions. Headlines like “Monsters Attack Village After Heroes Depart” or “Quest Not Taken Ends In Disaster” are sure to get your player’s attention.

The Logistics Of Publication

You’ve got stories and interest, but how is your paper produced? Has the printing press been invented and made available in your world? Are the articles magically transcribed to parchment by scholarly mages? Maybe consumers purchase magical stone tablets that display the latest news as it’s published. Your paper doesn’t even need to be a physical document. Citizens could subscribe to receive mentally transmitted news updates. Your imagination is the only limit to the process of getting current information out to citizens.

Once you’ve figured out what your news vessel is and how it’s produced, you can further flesh out the specifics. What types of stories does the paper typically feature? Is it a local publication, limited to a town or village? Is it a national publication that covers stories from all over the realm? How is it distributed? Does it print daily, weekly, or monthly? Is it mentally transmitted, magically teleported, or physically transported? Whatever you choose, just make sure that the reality of the newspaper makes sense in your world and is seamless.

It takes people to run a publication. You’ll need a publisher to run it, reporters to track down stories, and support staff to ensure it gets to the audience. It’s fun to make some of your newspaper’s staff key NPCs that your players can interact with. Maybe they’re always running into an ace reporter at the scene of incidents. Include a newsboy that leaks stories to the party for a price. The party could have a little side hustle selling stories to a contact from the paper. Allowing players to interact and get involved with the paper will keep them interested in it.

Keeping Up With The News

You don’t have to actually write an entire, real newspaper to include one in your game. Just create two or three articles of interest for each issue. Make sure to keep the articles short, around three to four sentences. Ideally you should only share just enough information to convey the message or hook of the article. The last thing anyone wants to do is listen to you read articles for ten minutes solid. Alternatively, you can treat your paper as more of an ‘oracle’ with your players. They can ask questions like, “Is there an article on the explosion last night?” or “Does it mention any upcoming events?”

Have A Plan For What You Write

Not every article in your paper needs to lead to a quest or story beat. However, you should have a reason as to why the article is included for players. Is it an update on the party’s progress or story progression? A potential hidden side quest? Exposition for upcoming story lines? Flavor for the world overall? Major event recap? A misdirect that leads players to a trap or dead end? It’s important not to waste a player’s time with unnecessary articles that lead nowhere. Remember, the newspaper is a story tool for you to utilize.

Realistically, you’re not always going to have a need for the paper. Time is also a factor that can keep you from writing fresh articles every session. That’s why it’s a good idea to have some canned articles. Just a couple of planned blurbs that you can easily plug in to a daily paper can make your life easier as the dungeon master. Just make sure that your canned articles have a resolution if players decide to follow through on them. It can be as simple as “Come try the city’s finest ale at The Dockside Pub”. Players could easily choose to explore the new location or pass.

News You Can Trust?

An interesting concept to play with is honesty in publishing. Sure, the players receive the latest news… but is it trustworthy? Taking it a step further, you can introduce and reinforce to the players consistently truthful articles. Quietly have an NPC take over as publisher and start including articles that push their own agenda into the paper. It may take a while for the party to realize they’re being fed lies and propaganda. This slow-burn idea will result in a moment of realization that’ll be explosive at the table!

Newspapers are a treasure trove of resources for your NPCs as well. This goes well beyond sharing information as previously discussed. Really examine all the different ways you can utilize the company’s resources. A staff of reporters isn’t all that different from a network of spies to be utilized by key NPCs. Access to printing and distributing the written word can be used for many purposes. Spreading religion, creating propaganda, and increasing education are all great examples. Not to mention the wealth of a successful business can easily translate to power for whoever wields it…

It’s up to you how focal your newspaper is in your campaign. However, an establishment like a newspaper inherently creates its own stories. If players are into it, you can create full story lines that center around the paper. Are there two rival publications that are constantly sabotaging each other’s stories? Is the paper owned by the BBEG and used as a means to spread their agenda? Is the publication just a front for what’s really going on behind the curtain? It’s always fun to delve into the secrets of established entities in your campaign!

Extra, Extra! Read all about it! Until next time, stay creepy and happy gaming.